Discover the KKL Luzern masterpiece on a guided tour

The KKL Luzern, the work of the French architect Jean Nouvel, is prized amongst other things for its concert hall, which ranks amongst the best in the world. Take a peek behind the scenes of the Culture and convention centre Lucerne and learn more about this masterpiece.

The KKL Luzern occupies a central location in Lucerne City on the shores of Lake Lucerne within viewing distance of a stunning mountainscape. Nouvel had the idea of bringing the inside outside and vice versa, giving expression to this idea with water channels that led directly into the building and a cantilevered roof that juts out in dramatic fashion over the forecourt.

The building’s stand-out feature is its immense flat roof, which has become something of a landmark. The thickness of the markedly overhanging roof decreases at its outermost edge to almost nothing. This feature finds the thickness of the steel construction resolving into a thin line. The aluminium plates of the underside reflect the waves of the lake, which in turn reflects the roof. Nouvel is deliberately playing with the idea of reflection.

Two water channels separate the building into three individual zones: the Concert Hall, the Lucerne Hall, and the convention facility and museum. The modern concert hall meets the highest acoustic standards and is considered one of the best in the world. 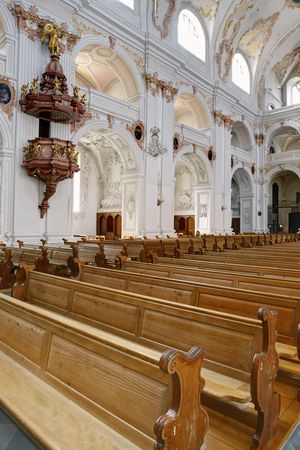