Weinmarkt is a picturesque square in the Old Town

Much of the walking takes place conveniently in the car-free Old Town, whose picturesque squares are peppered with historic, fresco-adorned houses. Look up and you will discern a wealth of architectural, elaborate and historico-cultural details.

These include the neat Weinmarkt, where the citizens of Lucerne 1332 swore an oath of allegiance to the federation formed by Uri, Schwyz and Unterwalden. Until the middle of the 16th century, the Weinmarkt was the fish market. The demolition of the two-storey wooden market hall, where meat, bread and leather had been traded, led in 1841 to the emergence of the square in its present form. The work of Konrad Lux, the Weinmarkt fountain of 1481, was ten years in the making and is considered the prettiest in the city. The original hexagonal basin was replaced in the 16th century by an octagonal one. The fountain’s column was also refashioned over the centuries, until finally sculptor Leopold Häfliger created the one seen today out of shell limestone. The original is preserved in the History Museum on Pfistergasse.

Mühlenplatz, which first emerged in the late Middle Ages following the demolition of a terrace of houses, is, at 1500 m2, Lucerne’s largest historic square. Excavations in the vicinity of the square have revealed that the area was already settled before the foundation of Lucerne as a city. During the Middle Ages, it was home to mills of all kinds due, principally, to its proximity to the river and the need for hydropower.

The town erected a public trading hall in Kornmarkt around 1370. Also serving as a granary, it was later converted and became the town hall. The traditional houses on Hirschenplatz feature fascinating ornamented facades which are under historical monument protection.

Legend has it that «Brother Fritschi», a carnival character, is buried in Kapellplatz with its colourful Fritschi Fountain. The fountain’s column depicts the Fritschi family. They are surmounted by carnival masks from the turn of the 19th century, and capping it all is a standard bearer. It is in Kapellplatz that the annual carnival starts on «Schmutziger» Thursday, heralding a week-long party which ends in the early hours of Ash Wednesday. 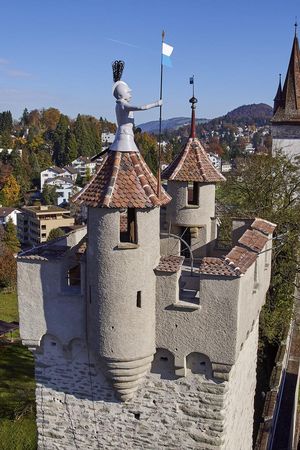 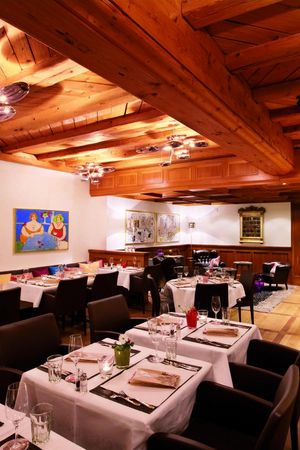