Lucerne’s landmarks – the Chapel Bridge and its Water Tower

Not for nothing is the world-famous timber bridge Lucerne’s most photographed destination, it being held in high esteem by visitors and residents in equal measure. Together with the Water Tower, the bridge forms a landmark in the townscape like no other attraction.

The Chapel Bridge these days links the Lucerne Theatre on the south bank of the River Reuss with St. Peter’s Chapel on Rathausquai, passing the Water Tower on the way. The devastation that caught the world’s attention was one that no one would have wished to have happened.

A major part of the Chapel Bridge caught fire in the night of 18 August 1993. All that could be saved were the two bridgeheads and the Water Tower. The remainder of the bridge was rebuilt in a record eight months, allowing the «new» Chapel Bridge to be reopened on 14 April 1994. Never before has Central Switzerland experienced such an incident as that which befell the emblem of an entire country and moved so many people around the world. When all is said and done, the Chapel Bridge – an incredible 650 years old – served not only in its early days as a means of crossing the river on foot, but also as part of the town’s fortifications. Forming the bridgeheads were the chapel on the right-hand bank and the Freienhof (now gone) on the left. Immediately recognisable when viewed from the air, the Chapel Bridge and Spreuer Bridge appear to bind the town together.

Just as significant as the bridge itself was the fascinating cycle of paintings which adorned it and lent it the requisite depth of character. The chronicler of the town of Lucerne, Renward Cysat (1545–1614), spent years studying the history of both ancient Switzerland and Christendom and formulating a concept for the pictorial decoration. The bridge was to describe how great good fortune had guided the many accomplishments of the Old Confederacy. Since it proved impossible to fund the venture from the public purse, well-to-do citizens were called upon to sponsor one or more of the panels. Cysat finalised his ideas in 1611, whereupon work could begin. The pictures were first restored in 1646. In 1726, the town had to appoint a watchman to keep an eye on the bridge and prevent youths from constantly vandalising the pictures. Prior to the fire in 1993, 147 of the original 158 panels were still in existence; 110 of them were directly affected by the fire that destroyed the bridge, of which some two-thirds either went up in smoke or suffered severe damage.

The defiant yet handsome Water Tower was erected before the Chapel Bridge, sometime around 1290–1300. Octagonal in shape and with sides 4.4–5 metres long, the edifice is rather unique. The tower is 39 metres in circumference and 34.5 metres in height. It has served a variety of purposes during its 700 years. As a lookout post, the comings and goings of boats in the town’s bay could be monitored. It formed part of the town’s lake-facing fortifications alongside the Hof and Chapel Bridges. It was used as an archive on a number of occasions from the 14th century onwards. The town’s archives were finally moved out of the tower in 1919. It served as the cantonal treasury and as a place of safety for war plunder. Until the late 18th century, the tower was also used as a prison. Prisoners had to sit on a toggle and be lowered into the dungeon on the end of a rope, re-emerging only after serving their sentence. Located just above the dungeon is the armoury, which today contains an extensive display of weaponry courtesy of the Artillery Association. 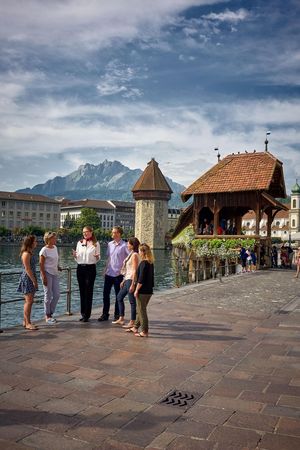