Lion Monument – a memorial exuding the portent of loss

Lion Monument – «the most mournful piece of stone in the world» / Photo: Beat Brechbühl

Carved in stone, yet deceptively alive – Lucerne’s world-famous Lion Monument has been impressing visitors from near and far for very many years. The imposing stone lion, however, is more than “just” a monument. Depending on your point of view, it can be seen as a commemoration, a work of art or a memorial. And as a proud landmark of the city of Lucerne.

The “Lion of Lucerne” is nestled in a rocky grotto in a charming park setting in Lucerne. Ten new interpretation panels outline the history and multilayered significance of the monument. The information is in German and English, while French and Italian versions are available by scanning a QR code. The same link provides more in-depth information surrounding the eight thematic areas outlined by the interpretation panels.

The Lion Monument is visited by around 1.4 million people every year, though few of them are aware of the tragic story behind this imposing work; this can be remedied by taking a journey back in time.

The ten-by-six-metre work was created in honour of the Swiss Guards who died in the Storming of the Tuileries in Paris in 1792. But how did this come about?

It’s 10th August 1792: on this day, some 1,000 Swiss guardsmen were protecting the life of King Louis XVI of France with unconditional loyalty and bravery. The revolutionaries stormed the King’s residence which the Swiss were defending, leading to the virtual annihilation of the Swiss Guard. The Lion Monument, a powerful memorial, pays homage to the selfless heroes of these men.

One of the guards, who happened to be on leave at home in Lucerne on that fateful day, was the officer Karl Pfyffer von Altishofen. He spent years brooding the tragic loss of his comrades-in-arms, then initiated the creation of a fitting monument to the fallen men, proposing the cliff below the Wesemlin as a suitable location and raising funds for this major project.

The sculpture of a larger-than-life lion, designed by the famous Danish artist Bertel Thorvaldsen, became a reality in a little over a year and was inaugurated in 1821 – a masterpiece that continues to exude worldwide appeal to this day. Or, as the American writer Mark Twain put it: “The Lion of Lucerne (is) the most mournful and moving piece of stone in the world.”

More info in the audio
Book your city tour here 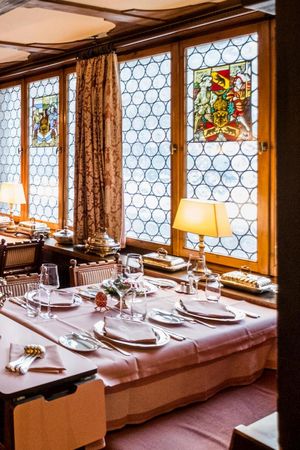