As well as the Chapel Bridge, Lucerne is home to another timber bridge of great interest. Located slightly downstream of the Chapel Bridge, the Spreuer Bridge does not enjoy such a high profile. Though somewhat shorter and less dominant in appearance, in every other aspect it is its «big sister's» equal.

Its name comes from the word «Spreu», meaning chaff: the town's flour mills were permitted to dump their waste into the River Reuss from this bridge. Built in 1408, the southern half is perpendicular to the River Reuss, while the northern portion veers off at an angle.

The Spreuer Bridge, like the Chapel Bridge, boasts a striking series of paintings. Painted by Caspar Meglinger between 1625 and 1635, they bear impressive witness to a subject matter that was much in vogue in the Middle Ages: the Danse Macabre (Dance of Death). The pictures remind the viewer that death is ubiquitous and comes to everyone, regardless of one's station in life. A further eye-catching feature of the Spreuer Bridge is the chapel incorporated into it and containing motifs and figures from the cycle of the ecclesiastical year.  Led by an actress with the help of an audio guide, the guided tour starts at the History Museum and takes in the Spreuer Bridge, Mühlenplatz and points in between. Explanations of selected pictures are offered complete with historical backgrounds. 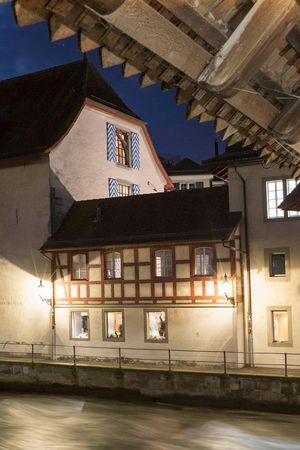