Once a symbol of power, the Musegg Wall and its nine towers are part of Lucerne's historic fortifications; forming a striking crown around the Old Town, the wall can be discerned from afar.

The Musegg Wall and Männli, Zyt, Wacht and Schirmer Towers are open to the public from 8 a.m. to 7 p.m. between 1 April and 1 November – a rewarding experience with superb views of Lucerne City, its bay and the River Reuss.

Visitors wishing to know more about how nature responds in an urban environment will discover that the Musegg Wall not only presents a fascinating aspect from afar, but also provides a valuable habitat for specialised plants and animals, some of which are endangered. The Musegg Wall is home to rare breeding bird species including jackdaws, goosanders and alpine and common swifts. The attentive visitor will also find bats, common wall lizards, wild and honey bees, spiders, slugs and snails populating the wall, not to mention a specialised flora.

The fortifications were begun in the 13th century and consisted of two rings of ramparts: the inner ring comprising the town wall along the Löwengraben and Hirschengraben, the Chapel Bridge and Spreuer Bridge, and the outer ring on an ascending sandstone ridge in the Old Town on the right-hand side of the River Reuss.

As the town, founded in 1178, continued to expand beyond the narrow confines of the fortifications, the Musegg Wall was built with more towers. The 800-metre-long wall, erected around 1400 following the Battle of Sempach, is considered one of the longest, best-preserved defensive walls in Switzerland. Nine stone entities, floodlit at night, remain standing on the Musegg.

The Nölli Tower bears the construction date 1513. Today's vehicular access was created in 1901. The wall's sole circular tower, 28 metres in height, is the headquarters of the Saffron Guild, complete with guild hall and archive.

The iron figure of the «Männli» (little man) is the second tower on the ascending ridge and is open to the public. It measures 33 metres from ground to pinnacle.

Erected in 1370, in keeping with its name («look toward the land»), this tower served as a watchtower for the protection of the town. It boasts a weathercock pointing left to right atop its high, peaked roof. The tallest of the nine brothers.

It gets its name from the hay that was stored in it. It was also used for the storing of gunpowder within its thick walls. A lightning strike in 1701 caused a mighty explosion that ripped the tower apart. Blocks of stone were sent hurtling across the town, causing immense damage, while the explosion itself killed a number of people. The rebuilt tower is 44 metres in height.

This 31-metre-tall tower, now open to the public, was erected in 1442 and features a clock. The dial with its digits is large enough to have been read by fishermen on the lake. Its bell, the Leodegar Bell, strikes the hour one minute before the other church clocks in the city.

It is at the 27.5-metre-tall Schirmer Tower that the gate of the same name leads out into the country. Towns within their walls were enclosed entities, and Lucerne was no exception. Citizens stepping through the gate found themselves in the country. Other than farmsteads dotted about the region, no further buildings were to be seen. The tower is open to the public.

The city of Lucerne stored its gunpowder in two towers as a precautionary measure. When disaster struck the Heu Tower in 1701, half of the gunpowder remained safe in the Pulver (powder) tower.  Measuring 27.5 metres in height, the tower ranks amongst the oldest buildings on the Musegg. It now serves as guild hall for the Wey Guild after its members repaired it.

The last of the nine towers is the smallest in the line. Its striking steep-flanked pyramidal roof is believed to rank amongst the oldest of the towers' roofs. It has acted as the guild hall of the Swiss Union of Master Joiners since 1936.

More info in the audio
Book a guided city walk 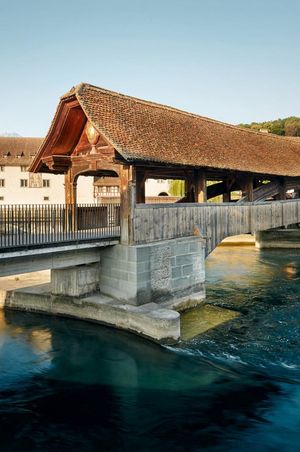 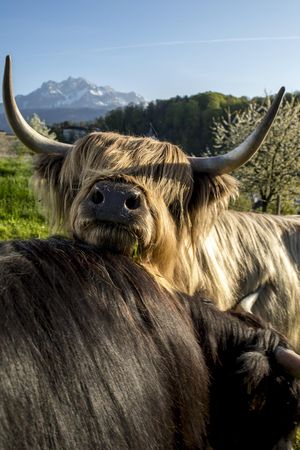